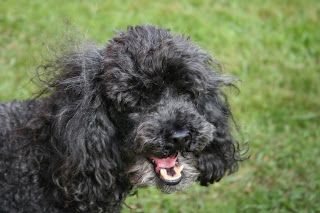 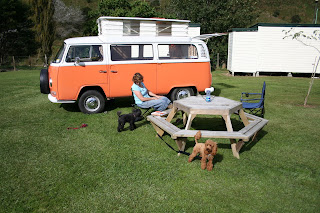 On Sunday we took the poodles away for a night in the old '72 VW camper and headed inland on " The Forgotten Highway" ( Abbie is just too big for the Kombi so she went to Marise's for the night).  Boy there are some isolated spots in NZ, you could hide away forever, no one would know where to find you!  We ended up staying the night at the Whangamomona camp ground ( was the school till it closed in 1979) where we had the place to ourselves, apart from a few chooks, a goat , a horse over the fence, but then another van arrived. Felt positively crowded!
Whangamomona is a republic, and for a couple of years the president was a goat, then Tai the poodle took over for a while till an assasination attempt! Think its a human president now.
Riley had to be kept on a lead, he would've chased the chooks and probably would've been chased back by the rooster!

Looks like you had lovely weather. Hmmmmm getting lost sounds nice

Sooo peaceful.. till the other van arrived, the guy turned up his stereo! Weather was great tho.

How neat Viv, to be able to pop the dogs in the camper and head off for the weekend. LOL on the rooster, yep, there's some of them around that you wouldn't want to take on!

Was lovely for a change. We haven't done it as much as we could have as with the two goldies it meant putting them in jail (kennels) ....Abbie on her own can go stay with "aunties" !

You look nice and relaxed... and you got good weather!!!