Will Pay You to take Him!!! 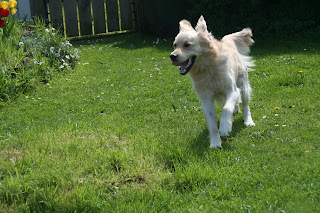 Yep! Not just FREE to a good home, we'll give you money as well!!! What has the Brodus done this time you ask? Picture this......  two  friends  around for dinner, Pete provided the leg of lamb which I cooked....no don't get ahead of yourselves, the lamb was safe!  Nestor ( single, cute, Spanish and cooks a mean paella!!!) made a cheesecake which he brought around for dessert. This man is a legend! Anyway, yummy dinner, DIVINE cheesecake, enough left for dessert for several nights...made the mistake of not immediately putting it in the fridge. Hmmmm. Riley was nutting off which he does when Brodie is up to something....I really must pay more attention to the ginga alarm!  Raced out to see paws on the bench and big pink tongue very tidily trimming the side of the cheesecake. He'd trimmed it almost in half the sod!!!!!!!  Hope he felt sick!!!! He didn't eat the biscuit crumb base but looked like he'd sucked all the cream cheese off it!!!!!!!     Cheesecake anyone?
Posted by Viv at 7:45 AM

LOL, he just wanted his piece too, at least he waited until you all ate some! ;) Too funny he liked the cream cheese part the best!

EWWWWW, no thanks to the cheescake! Dog drool doesn't really crank my handle.lol
Good on Riley for raising the alarm.

OMG!! Too funny!! So glad I have a pug... all he gets is the cherrios that drop on the floor!! haha

LOL, what a monster eh! Lucky he' so loveable!

Ahhhhh - I'll take him!!! Can just imagine how much my son would blame on him!

We used to have a basset hound - she would stand on her hind legs with her front paws on the table to gauge what she wanted (we learnt not to put people at the edge within her reach. Then she would drop back down and LEAP up to grab it! She could get to the middle of the dining room table with this technique - nothing was safe from her!

Dont let Brodie read this or you will have a whole heap more trouble to deal with!

hahahaaaaa...yep...we can take him no bother, won't change much around here.
I had a do who was very keep on raw eggs, once we made a mistake of forgetting a tray of 20 organic eggs my aunt brought in the sitting room while we left to take her to the bus stop. We came back to 20 cracked and licked eggs on sitting room floor - guess if we were able to salvage that carpet or not!!!
Annika