Not my usual colours, pink doesn't really grab me , I'm a bit afraid of it!  Used brown to tone it down a bit, using BG porcelain papers. The image is from Funky kits, one of their new digis. The sketch I have followed is from Just Christmas & Birthday cards. I though I'd also enter it in Cute Card Thursday which is Fairy fantastic, Papertake Weekly which is Pretty Pink, and Totally Gorjuss which is to add dimension. I've added crystal effects to the wings and added a bit of glitter to the dress. 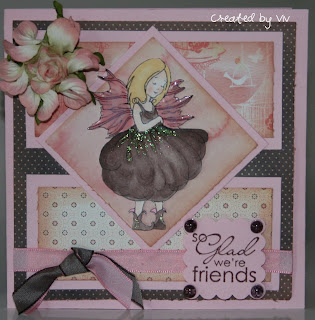 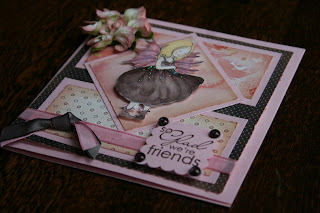 Its raining here, has been almost all day though its not cold. Went to see Denise's new scottish fold kitten...very cute but still a bit stressed after its flight. Poor baby.
Brodie has been lying in the poodle dog beds today....guess he likes their beds more than his own. Very hilarious to see him though, he is far too big!!
Posted by Viv at 4:34 PM

Ohhh this is so much nicer than my attempt at the challenge.Really pretty and frilly... not at all you hehe.

That's a stunner of a card Viv. LOL on Brodie, maybe it's wishful thinking...I wish I was a cuddly little poodle instead of a hairy big retriever ROFL!

Aaaaaaw, she's adorable!
Thanks for joining us on CCT :)
Hugs x

For someone who is not that keen on pink you've done a fabulous job. I love Pink and Brown together. The image is gorgeous and your layout from the sketch is super!

Gosh, what a beautiful card!!! It's absolutely stunning!!
Thanks for joining us on JCBC this week.
Hugs, Kristin :)

Even though you don't like pink you have still made a beautiful card. That is such a lovely image and I love your dimension. Thanks for joining us at TG and hope to see you again.

Glad you pushed yourself out of your comfort zone! as this card is just stunning!! love everything about it! Hugs Juls

A very nice card, I like very well. Thank you for your participation in JCBC.
Greetings Andrea from Germany

Oh wow! I do love the colors you picked!! perfect and love the shading on the image:-)
Thanks for joining us at TG this week
XMichele

Beautiful card! Thanks for playing along at JCBC

Oh wow, this is gorgeous! Seems like that's all I use is pink. ;) Your use of it looks amazing!

simply adorable ~love the pink/brown tones and all the pretty detail
thanks for using the sketch on JCBC!!
vanessa xx