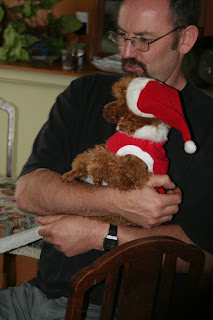 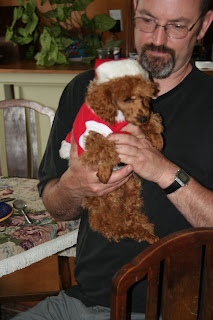 Well actually Trace, red doesn't look that bad on him!  This was Riley's first christmas!
I decided to take the boys out to Marise's yesterday , loaded them in the car, Riley bouncing around with excitement...damn , flat battery! Had to unload the boys , but the look on their faces was priceless! Soooo disappointed.  Charged the battery up eventually and got them out there so the day was saved!
Posted by Viv at 7:40 AM

Time for a new car Viv. You will have to start taking that battery charger with you everywhere you go.. opps, thats right you already have done that!!!

Aww see he can wear red! And he can sit still lol! Bugger on the car, and I can just picture their wee faces...lucky dogs are very forgiving isn't it lol.

Awww, what a cutie! My shih tzu would have a fit wearing that, lol! :)